What is the first thing you think of when asked to go to South America? Drug Lords, Narcos, Pablo Escobar…and fantastic coffee?! I’ve just spent 10 amazing, jam-packed days in Colombia, and let me tell you about my experience...

Since working with Java Republic I have looked forward to the day when I would be asked to go on a trip to coffee origin, but I never knew when it would happen until recently Jeff (our Finance & Operations Director), invited me to go and meet the coffee farmers and see their part in producing the coffee that we roast and enjoy. To be honest, I knew little or nothing about Colombia apart from that it was somewhere in South America and that Java Republic buy some lovely coffees from there.

The date of travel was set for the 8th May (not far from when I received the invite), so I quickly checked the calendar, only to find that it clashed with my annual salmon fishing trip to Mayo to fish in the Owenduff River!! I didn’t have to think twice though; I was over the moon of the thought of going to Colombia, and salmon fishing would have to wait until another year! 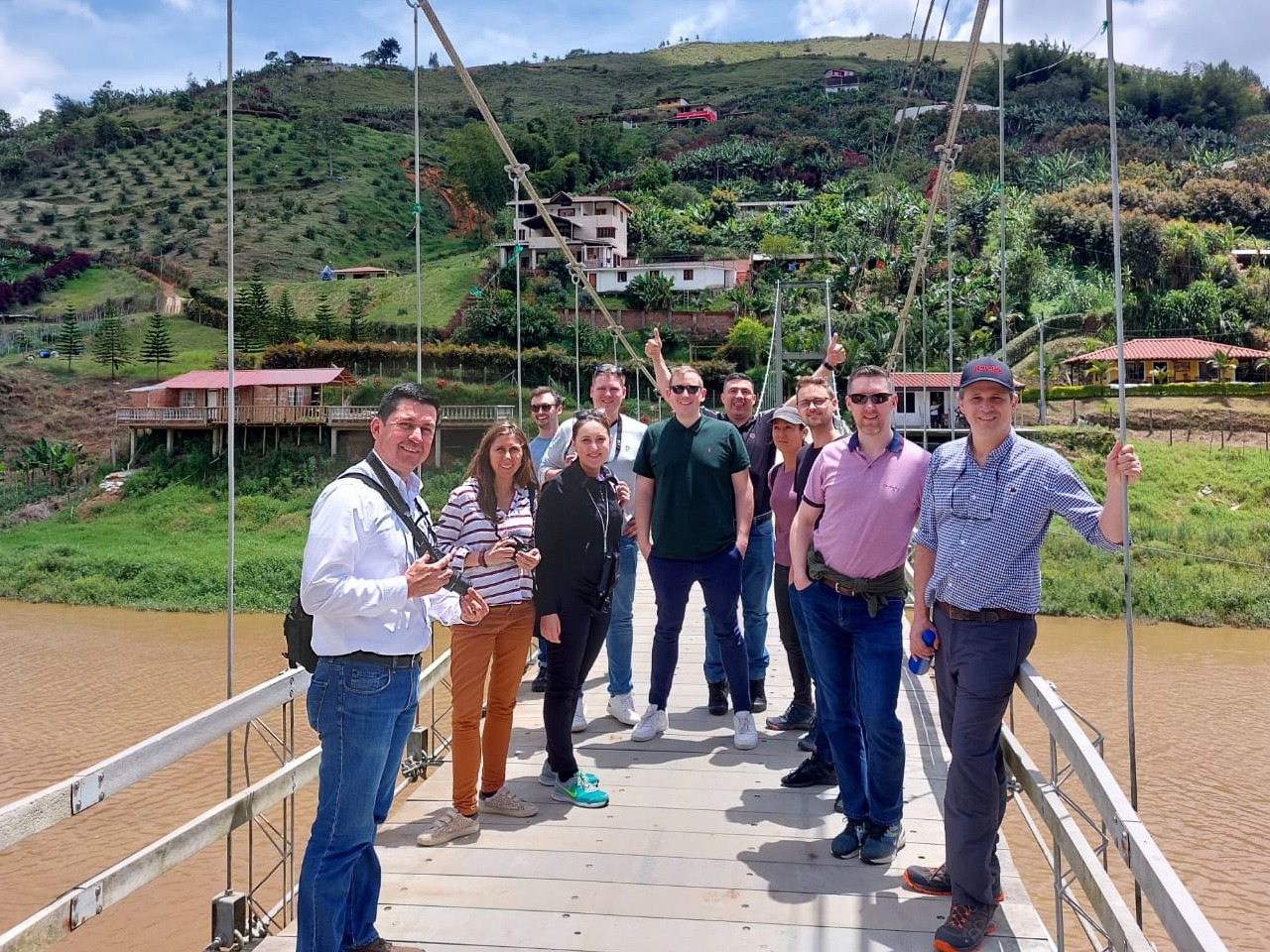 After a long-haul flight, we arrived in the capital city Bogota, the third highest capital in the world. We were not stopping here long though. We stayed that night in a hotel and set off early the next morning on a flight to Medellin (home of Pablo Escobar). This was a one-hour flight instead of a 10-hour rough road journey. With a population of 2.6 million, it is the second largest city in Colombia and makes up 13.9% of the country’s economy. Despite this, it is a city where the poverty levels have increased dramatically since Covid 19 and now 10% of the city lives in extreme poverty, surviving on less than 45 dollars a month.

After an hour drive from Medellin, we arrived at our first coffee stop at El Peñol where we met Sonia, the local coffee buyer. She buys approximately 3 container loads of coffee from local farmers each year. The coffee fetches a premium price as it is sourced from small farmers. The small farmers not only grow coffee, but other crops as well such as avocados, oranges, bananas, and passion fruit. The area of El Peñol is popular with tourists and offers beautiful views of its lake and reservoir. We got the opportunity to taste a 100% Caturra varietal which Sonia roasted on a frying pan at home! It was surprisingly good! 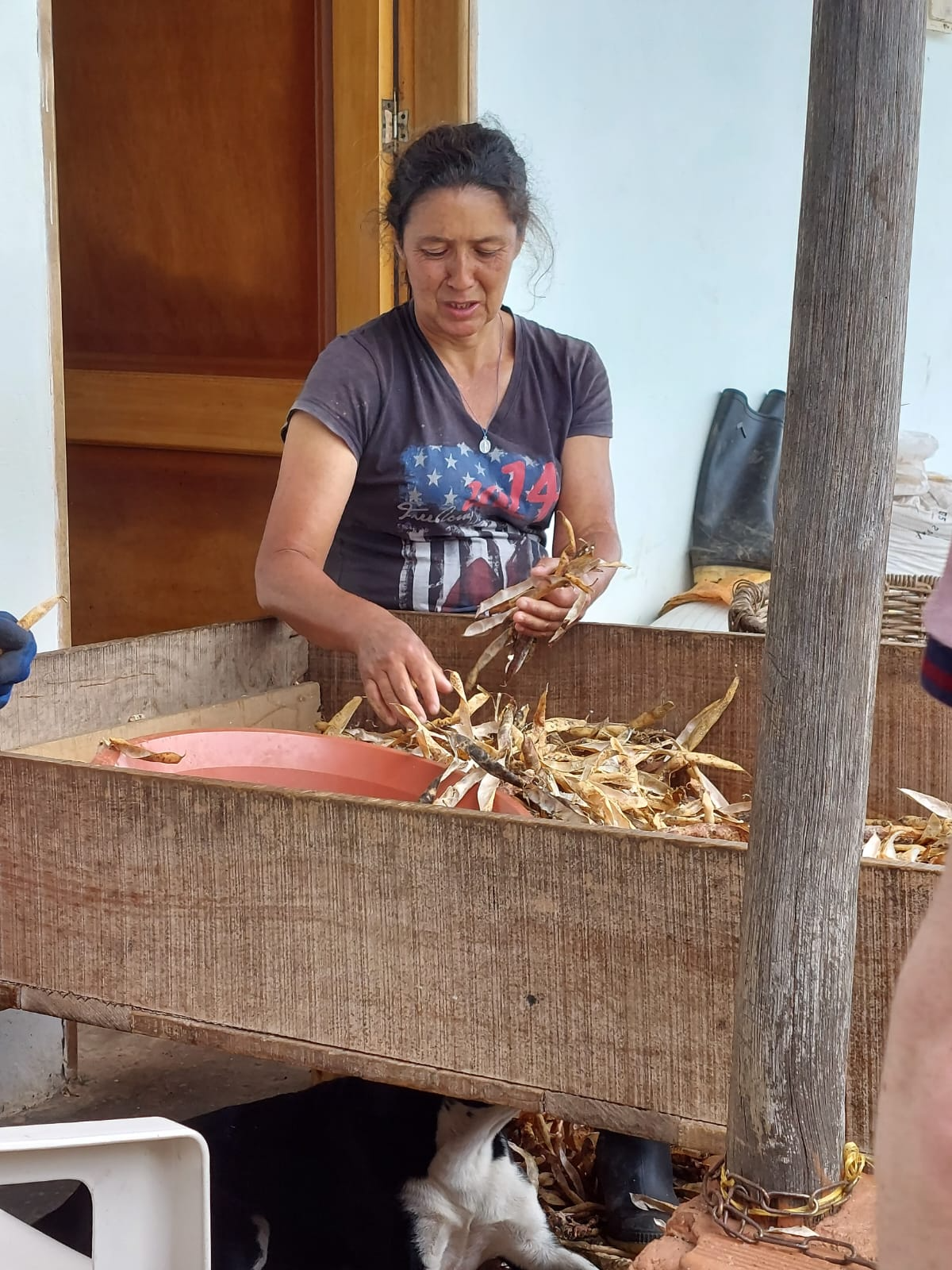 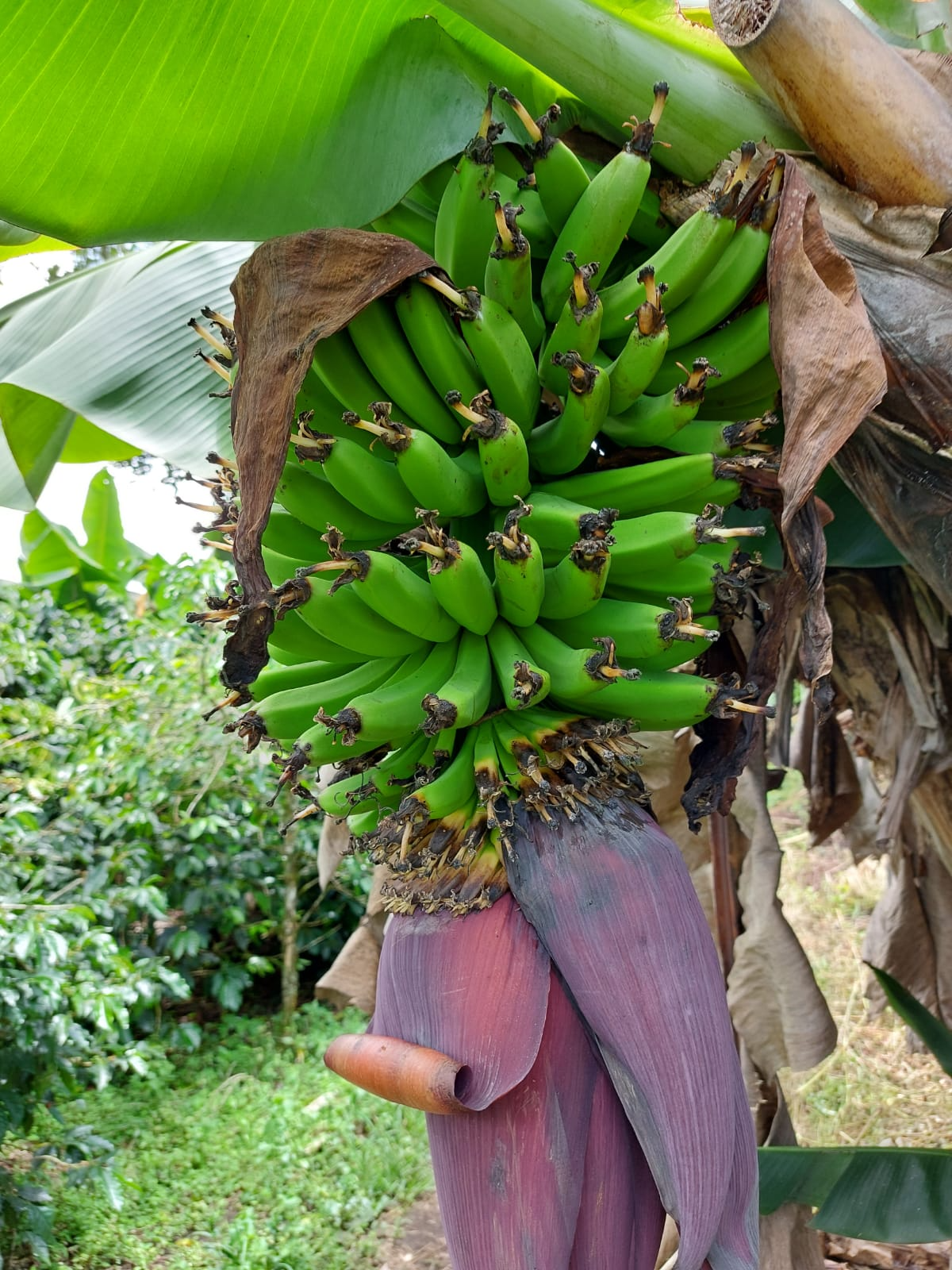 The first coffee farm that we visited in El Peñol was a small farm measuring about 2.5 hectares and had about 4,000 coffee trees on it. The farmer was 88 years old and told us that he struggled to find help with picking the coffee beans. He had to rely on himself and one other lady to harvest it. However, I was glad to later see that there were several other family members at the house working together to remove Red Cargamanto beans from their pods after they had been harvested. During the whole trip, I found that it was not unusual to see three or four generations of one family living and working together on a farm.

At the next farm we met Josh Luis Restrepo, a coffee farmer whose father had started the farm in 1964. He recalled how his father was kidnapped for 11 months in the 1980’s, his mother kidnapped for 6 months and he himself was also kidnapped for 6 months in 1990’s. This was a common occurrence before the peace process and the cartels conducted kidnappings purely for ransom money. Interestingly, while kidnapped they were fed and treated well but as a form of torture, they were isolated and not talked to for months on end, which the farmer said was mentally very difficult to deal with. The Restrepo family now own two very successful coffee farms, but it did not come without its risks and consequences. 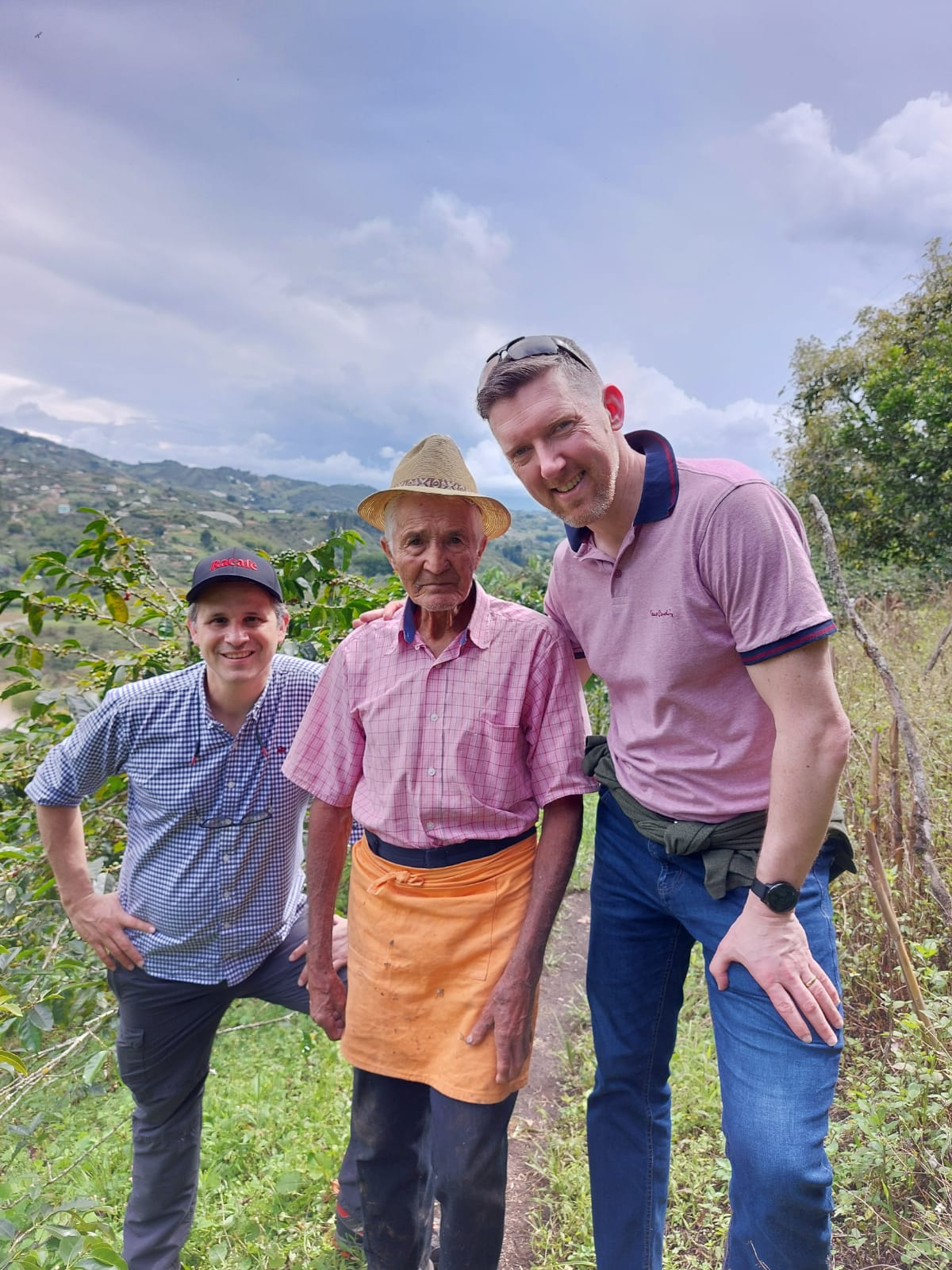 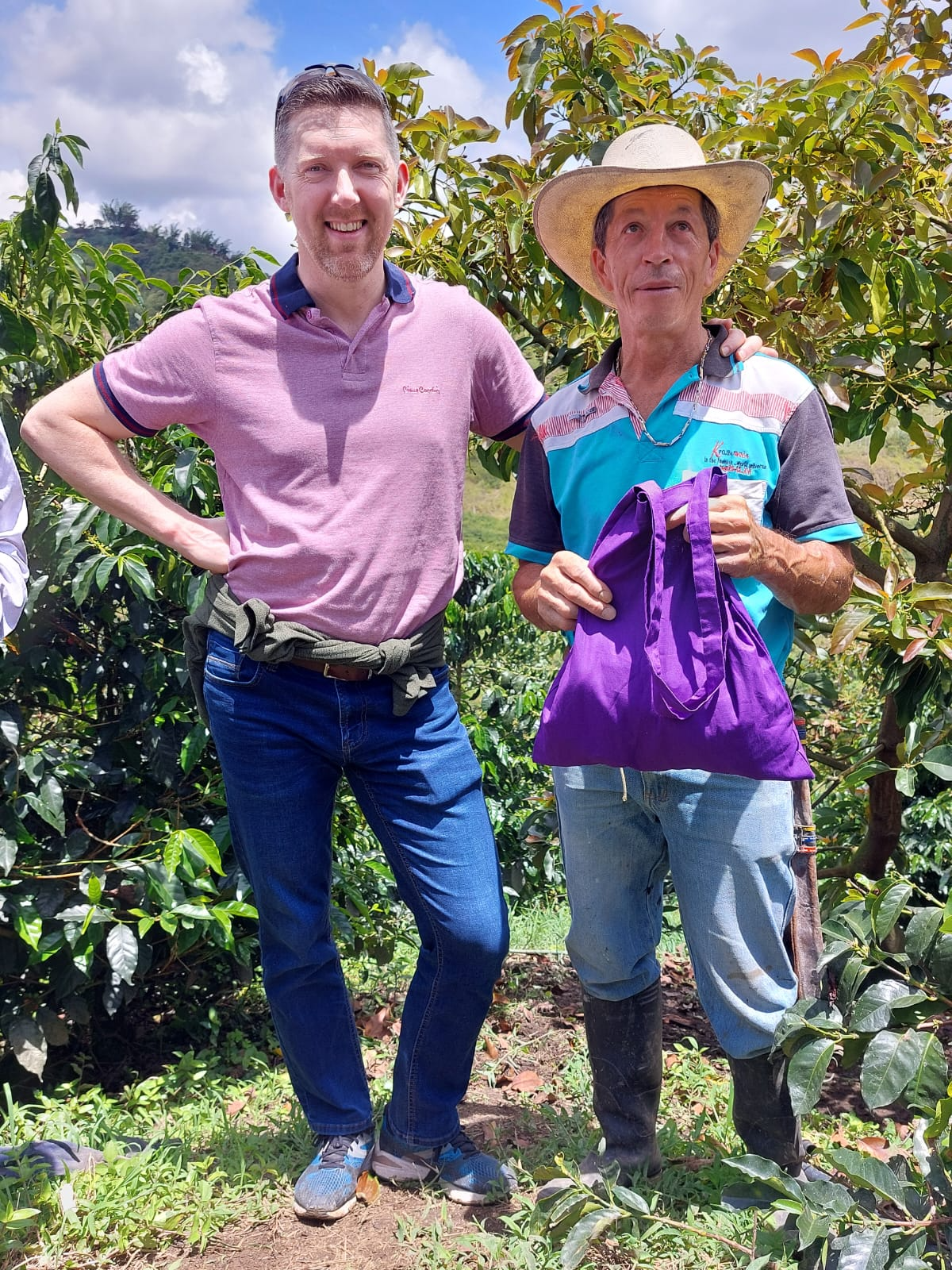 One of the most dangerous parts of the trip for me was travelling by car on the roads. While travelling to Asopep, which was a two hundred kilometers road trip, it took us an eight-hour car journey. This was because we were driving on winding mountainous roads up to 3,300 meters high. We started off driving on lovely tarmac roads which would turn to dirt tracks because the of all the rainfall and the roads had been wasted away by landslides. The locals did not think twice about overtaking on a cliff edge with oncoming traffic. I was afraid to fall asleep as I felt I needed to be awake for the impact!

On 2 occasions we were suddenly stopped with a rope pulled across the road by indigenous police with large machetes. Our guide tried to reassure us that we were in no danger, but my heart was still pounding as we were removed from the car and our luggage was searched. I’m not sure if money exchanged hands but we were allowed to proceed, and I breathed a sigh of relief. 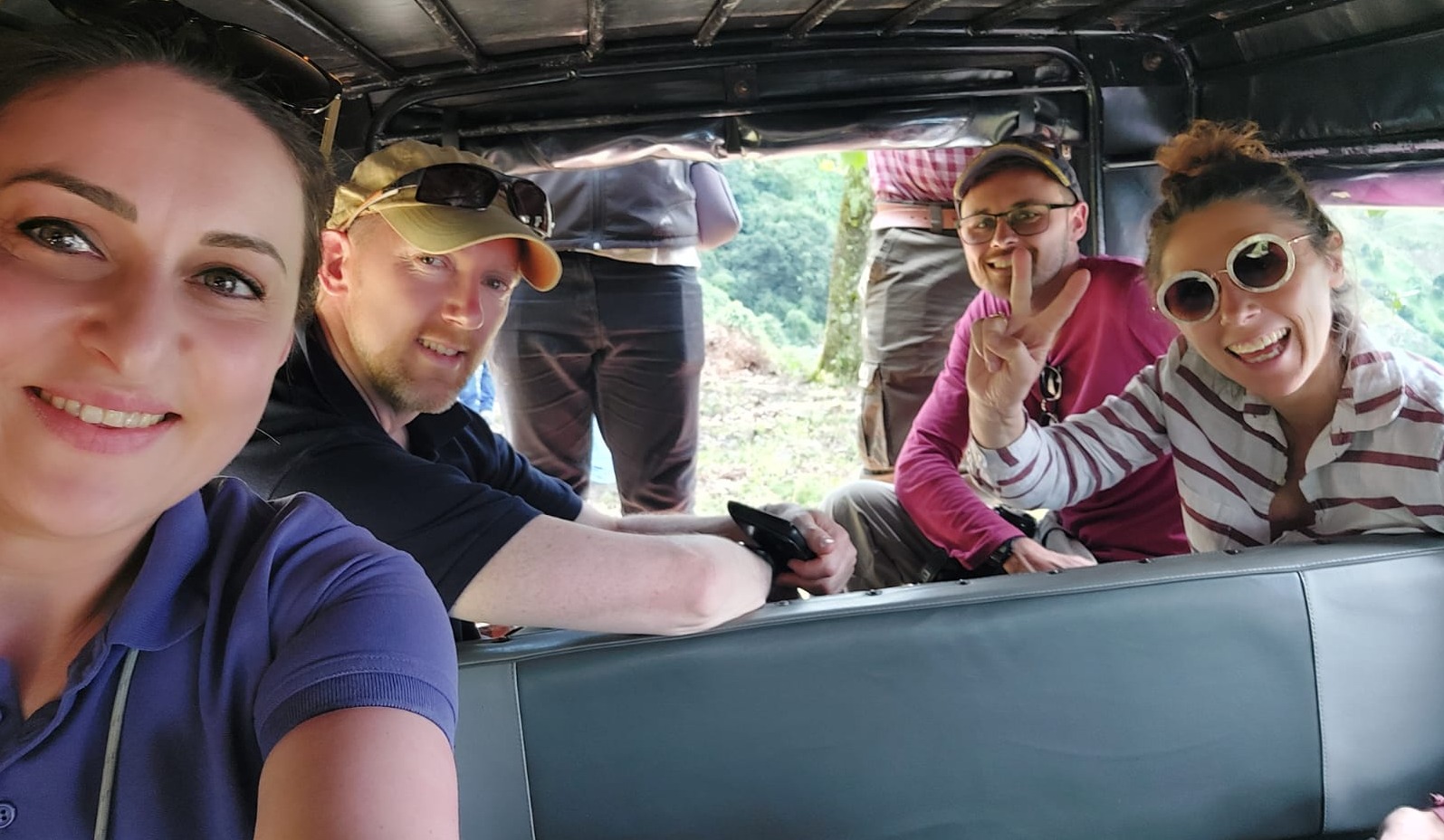 While in Asopep we were treated to a concert where young kids from the local village put on a show for us using instruments that they were learning such as guitar, flute and trumpet a long with traditional instruments. They practiced every day, and I was blown away by their confidence and skill level. Being part of this group encourages the children to feel part of a family and a community and helps to keep them of the streets and away from drug gang involvement. The kids also served us coffee, which was brewed using Chemex, v60 and Siphon. It was exceptional coffee and again great to see their skill level and the pride they take in it. 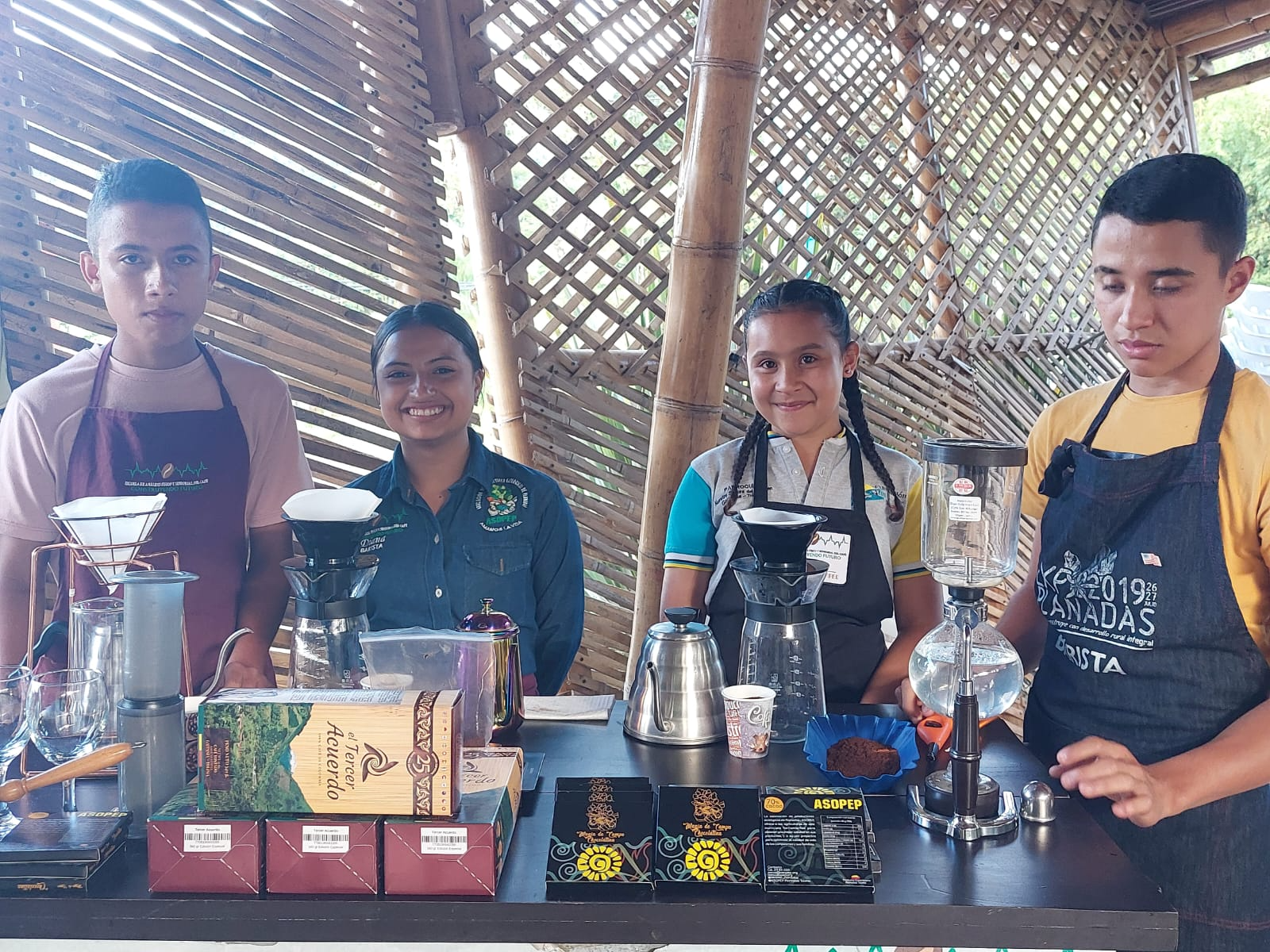 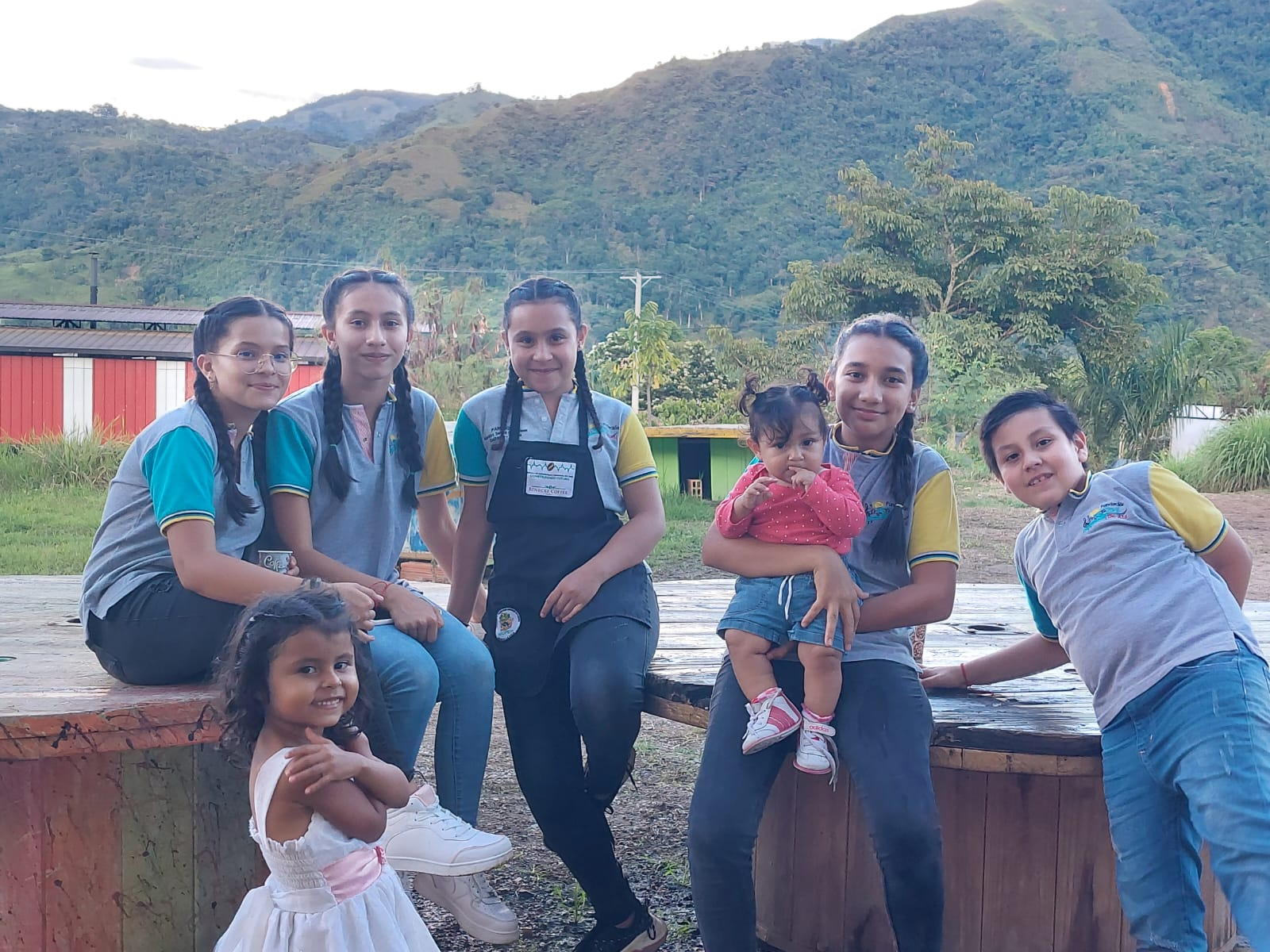 As a people they are so generous. While in Inza, again miles from nowhere, we were invited for lunch with a family on a farm about 1600m up a mountain. We got such a warm welcome. We were given a salad which we were reluctant to eat as most of the group had got food positioning the day before. Fair play to Steven and Jacob, they got stuck in and I followed suit. Little did I know that was just the starter and a huge traditional chicken, bean and plantain broth served with corn bread was to follow. They had produced everything from the farm apart from the rice. My soft Irish teeth were no match for their chicken or “rubber chicken” as we renamed it later. We are so spoiled in Ireland! This was followed by more avocado salad and sweet desert and then coffee which had been roasted for an hour and a half on a frying pan. Not the best I must admit but I came away thinking this was like Christmas for them, they literally gave us everything. 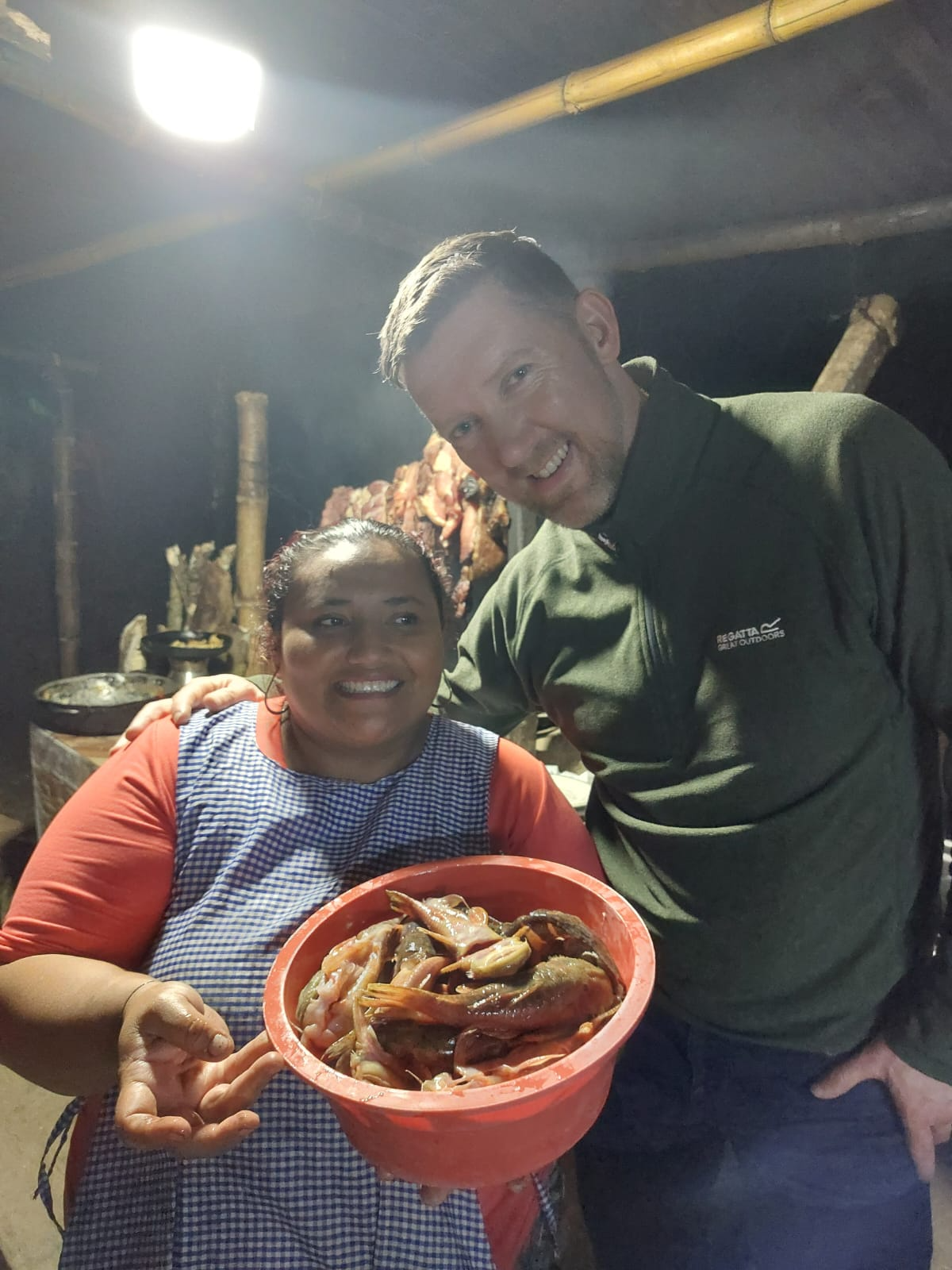 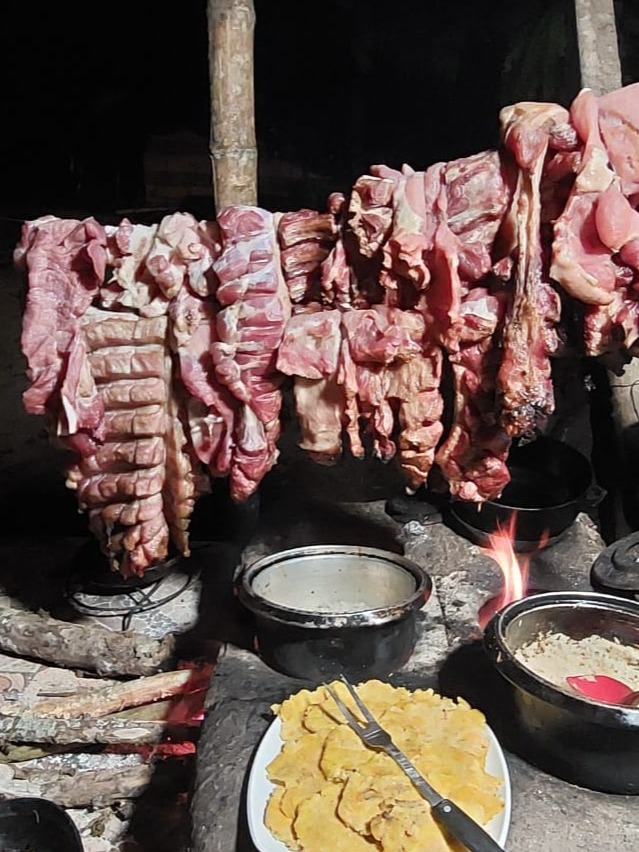 It is now three weeks since my trip and I can truly appreciate the experience. I have had time to recuperate and reflect on it. I have a newfound respect for our coffee farmers. They live in dangerous environments, farming on near vertical cliffs constantly battling the elements. They take their lives in their hands daily as they transport the beans to the local village markets. They know no different.

I am happy to see that the farmers are making a good living. Even with a small farm of 3 hectares a farmer can have a good quality of life. With the support from the government, they are reinvesting in the farmers with new coffee varietals and with better resistance to rust disease. The farmers are doing great work improving their sustainability and research on how they can create fertiliser from the outer cherry left over once the beans have been removed.  With this forward-thinking mind set the future of Colombian coffee is bright.

Is Grinding Coffee Worth It?

September 20, 2022
Sunday,Monday,Tuesday,Wednesday,Thursday,Friday,Saturday
January,February,March,April,May,June,July,August,September,October,November,December
Not enough items available. Only [max] left.
Add to WishlistBrowse WishlistRemove Wishlist
Shop
Filter
0Wishlist
0Cart
Account
Search
We use cookies to improve your experience on our website. By browsing this website, you agree to our use of cookies.
Accept